In the Freizeitmagazin LEO, a supplement of the daily newspaper "Die Rheinpfalz", a report about our Packrafting Erlebnistage Nahe (In German) appeared on July 1, 2021.

"Leisurely river passages alternate with splashier sections. At the end of the day's tour, the boat is packed into the backpack and it's back to the starting point on foot. The challenges in the river and also the hiking routes are just as doable by beginners as by parents with children."

Report on our Hunsrück tours in the KANU SPORT magazine of the DKV, November 2020

In the magazine KANU Sport, the magazine of the German Canoe Federation, Sebastian was allowed to report about our very first Hunsrück tour in the issue 11/2020.

Extract from the report:

"At idyllic little "parking bays" between old, over-mossy willows directly on the shore we moored our boats and proceeded to survey the site and discuss the line. It did not take long and one after the other "plunged" down. What followed was pleasure cruising with some minor blocking, swells and occasional drifting until we were hungry enough for an extended lunch break. A small spruce shelter welcomed us comfortably at our mooring. A while passed until everyone was peeled out of the dry suits, all equipment was stowed away and a steaming pot stood in front of each of us - various variations of pasta - handed to us by clearing skies and the odd ray of sunshine. Yey!"

Our Packrafting Erlebnistage Nahe (In German) were the topic of the weekend supplement "Boulevard" of the Bonner General Anzeiger on August 22, 2020.

Journalist Martin Wein accompanied our guide Johannes and a group of participants on a beautiful summer weekend on the Nahe and tried out the fascination of packrafting.

Excerpts from the text:

"On a summer Saturday at the Nahe-Alsenz-Eck campground, Johannes distributes rolled-up boats, pack sacks, paddles and life jackets to a couple from Frankfurt, a father with his sons Luca and Linus from Zweibrücken, two people from Bonn and a single man from Siegen. Water bottles, sandwiches and sunscreen stuffed into the backpack - and off they go on foot for an hour upriver.

We're off onto the water - or straight into it. Getting in is a bit tricky. Let yourself fall in like a wet sack," advises Johannes. If you bob around, you'll end up in the river. You'll float downstream much more elegantly."

Interview with Susanne and Sebastian in the EuroNatur Foundation Magazine, April 2019

Since 2018 Land Water Adventures has supported the project Save the blue heart of the EuroNatur Foundation for the Conservation of Wild River Landscapes (more information in Blog). At the beginning of 2019, the foundation's magazine asked Susanne, contact person for nature conservation, and Sebastian, founder and owner of LWA, in detail what our view of nature conservation is and why we care about these river landscapes.

The interview has been published in EuroNatur magazine 01/2019 (PDF only available in german, online version also available in english).

Excerpts from the interview:

Why do you support the „Save the Blue Heart of Europe“ campaign?
Blech: As water sports and nature enthusiasts, a dam boom of course alarms us. Most of our rivers in Central Europe have been converted into transport routes or electric power sources. Dammed and fragmented, many have lost their wildness and much of their ecological quality. The question is: Don’t we have alternatives today?

What's it like paddling an untamed river?
Schmidt: What attracts me to natural rivers is how unpredictable they are. It’s an incredible feeling to ride on a river which is new practically every day because it has changed with the water level. New sandbanks have formed or whirlpools have rearranged the stones. The diversity of animals is tremendous. You simply feel that the river is alive. All this conveys a feeling of wilderness and freedom.

Portrait about the founder aired in “SWR Persönlich” in October 2017

The German TV Channel “SWR” followed Sebastian to Kaiserslautern and to the autumnally Nahe Valley to search for historical paths to find out more about the foundation and origin of Land Water Adventures.

Please visit the online version of the TV report.

This online magazine is reporting on the foundation of Land Water Adventures and conducts an interview with the founder Sebastian.

"Sebastian Schmidt takes his costumers on several tours to places far away from civilization and brings them to their limits. For this, he gave up his permanent job as a doctor of mathematics..."

Please visit the online version of the report.

On unusual sparkling waves for August, we brought weather reporter Markus Bundt, along on a packraft, to one of the most beautiful parts of the Nahe. 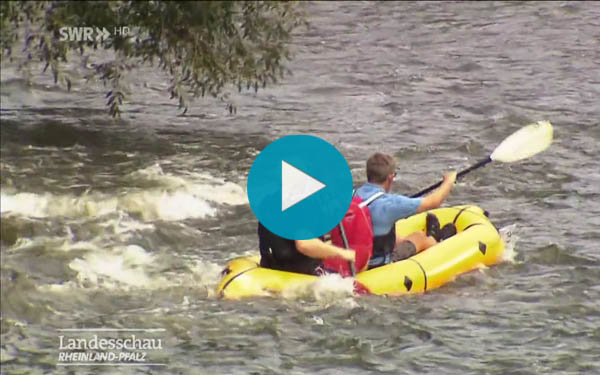 Please visit the online version of the TV report.

The KANU-Magazine writes in entertaining and crispy words about the Koritnica-Run 2016./>
An excerpt:

"The valley of Soca is a paradise for watersport athletes. The Koritnica-Run in a packraft proves that you do not essentially need a kayak.
[...]
True to the motto “pump it, pack it, run it” it was an exciting run with international participation – even from Japan…”

In spring of 2016, freelance journalist and researcher Susanne Blech accompanied us on one of our Hunsrück trips.

She wrote a 6-page report, which was published in the Kajak Magazine 06/2016. 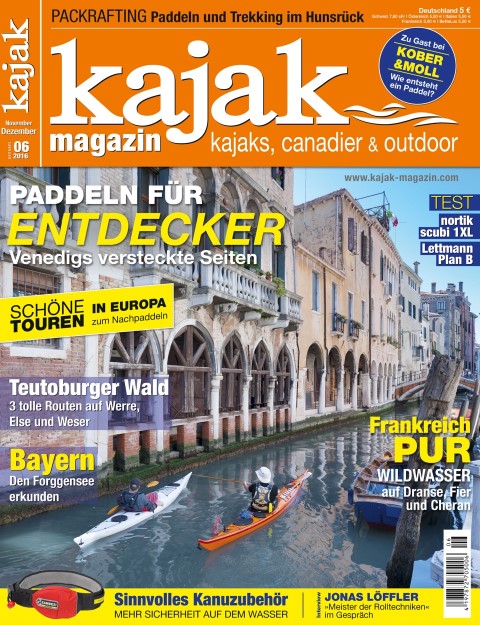 “The sun is about to go down as the six exhausted packrafters arrive at the remote Schmidtburg close to Kirn. [...] In the middle of the ruins of a once stately fortress, they set up camp in the twilight.
The first day of the spring tour through the wild Hunsrück is coming to an end…”

“Together, they fought their way through the “jungle”, slept in the ruins of a castle with the sound of falling raindrops, sweat on a part of the Soonwaldsteig and finally surfed on the high water waves of the Nahe. Sebastian’s self-conception of leading the tour, but also leaving everyone’s freedom, is well received….”

You can read the complete article in the Kajak Magazine 06/2017.

Report of the SWR in September 2016

In late summer, the German TV channel SWR with its series “Fahr mal hin” (“Go for a Ride”) was with us in a packraft on the Nahe.

In the Spring of 2016 the Outdoor Magazine published a report about the expedition “Packrafting Laponia” from Jannis and Peter of our team.

In this area is our Packrafting Expedition Laponia.

Excerpt of the report:

“…but as the clouds dispersed in the evening, the sun floods on the Rappadalen and gave us a panoramic view to the mountain top. We finally understood why this National Park is so famous. Steep mountains with inaccessible valleys, and in-between the river Rappaädnö winds itself through a green delta.”

“On day 20 of our tour, the thought flaring up for the first time, that we might not make it."

“ We are paddling between the skerries, an archipelago made up of a number of islands, blocking our view to the horizon. Slowly we recognize. Did we…”

You can read the complete 5 page long article in the Outdoor Magazine 04/2016.

SWR1 – Radio Interview in the Hunsrück in April 2016

SWR1 Radio visited us on the shore of the Nahe, on preparation day of one of our Hunsrück trips in spring 2016 and interview Sebastian right on the water.

The “Rheinpfalz” writes a profile about the history and idea of Land Water Adventures.

After a courtesy visit to the city of Kirn on one of your Hunsrück trips, the Kirner Zeitung writes about Land Water Adventures.

The Kajak teacher Andreas Schultz writes in the KANU Magazine about his escapade on a packraft in Soca! Since then, the trip is in our regular tour schedule.

The magazine “Die Wildnis” of the international union of wilderness guides writes about the first Hunsrück crossing. Since then this is our Hunsrück Tour.